With no explanation, the Capital has deleted all previous comments and turned of new comments 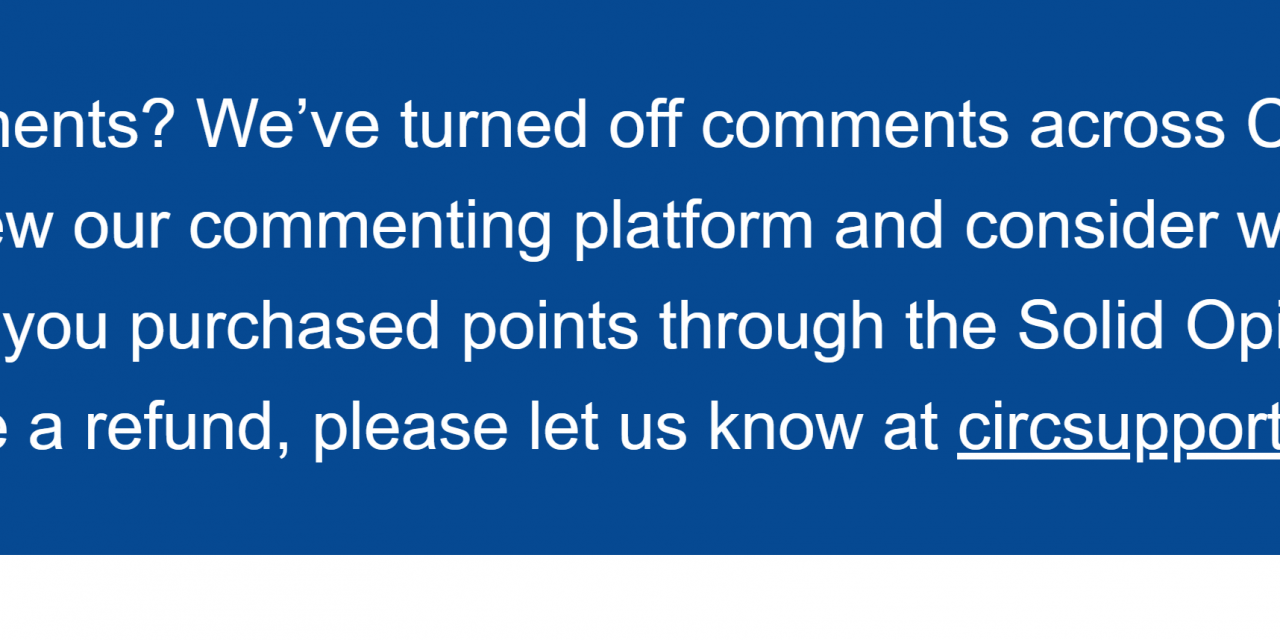 As of at least August 9, 2018, when I first noticed the message below, the Capital has deleted all previous comments and turned of readers’ ability to comment on new articles.  The new comments policy took effect between July 24, when I last posted a comment, and August 9, when I discovered the new policy.  Here is the notice at the bottom of articles I first observed on August 9:

This notice is interesting for what is says and doesn’t say.  It doesn’t clearly say it is deleting all previous comments.  It only clearly states that it isn’t accepting any new comments.

To my knowledge, the Capital has never before turned off all new comments–or at least not for more than a very brief period.  So this policy appears to break new ground.

In contrast, this is the third time in the past decade that it is has deleted all previous comments.  The two previous times it provided no notice.  The comments were merely there one day and gone the next.  That policy of deleting comments–and doing so without public notice–was one of the major reasons that I added my comments to this website, as I had a feeling that the Capital would find some excuse to delete them from the public record.  I also had experienced the Capital’s policy of not uploading letters to the editor to Lexis-Nexis, so they effectively became invisible after a relatively brief period of time.

To the Capital’s credit, it has posted the note above concerning new comments at the bottom of all new articles published on its website.  But I suspect that it had no practical choice but to provide this notice, as otherwise it would have had to field a flood of user queries about the missing comment option.

The notice is not much of a notice for such an important editorial change.  When a local newspaper essentially has a monopoly on local news, as the Capital does in Anne Arundel County, commenting policy has been viewed as a vital mechanism to preserve First Amendment values of free speech.  Allowing open commentating takes away the sting of it being a local monopoly with a choke hold on local political news.  This is the practical reason why the Capital has often described itself as an open access platform to host important community discussions.  The ban was the subject of the following letter in the Capital, dated September 7:

I’m going through withdrawal. It is approaching eight weeks since The Capital turned off the reader comments section online for a “review of commenting platform” and “ways to improve the system.”

In the meantime, I have no way to point out the numerous misspelled words, examples of poor use of grammar, or respond to ideas where the solution appears worse than the problem. There may be better ways to allow reader comments than anonymous comments from “keyboard warriors.” And name calling should be removed immediately.

But a two month revamp tends to lean towards not being receptive to critical comments.