Surprising Disagreement: Are the seven referendums on the ballot controversial?

During the past week, the Capital reported the seven questions on this year’s ballot as though there was no controversy surrounding them. But the recommendations of the Capital, County Executive Steve Schuh, and County Council Chair Jerry Walker all differ on at least one recommended vote.  For my Washington Post op-ed suggesting changes to this process–in part to improve the public deliberation surrounding it–see here. Note that my primary interest is in the referendum questions that cannot make it to the ballot because of the County Council’s veto power over charter reform.

This article does little more than reprint the information already on the ballot that voters have received in the mail.  Obviously, the authors of these ballot proposals want them to pass and so have phrased them in the most modest and appealing terms.  It is the Capital’s job to go beyond the obvious, which I hope it will at least attempt to do between now and Nov. 3, when voting begins.  At a minimum, it should not write an editorial endorsing or opposing any of these ballot items until it has reported on them in a thoughtful way and so has demonstrated that it understands their potential risks as well as their already stated  benefits.  I recently published an op-ed in the Washington Post, “Fix Anne Arundel’s decennial charter revision process,” proposing, in part, a mechanism to enhance public deliberation on proposed charter revisions.

Jerry Walker’s and Steve Schuh’s recommendations were emailed to their email lists. 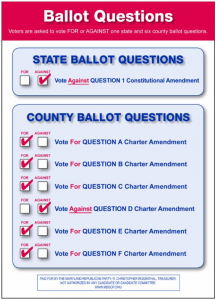 Many people have asked for my recommendations regarding the ballot questions and the candidates that will appear on the ballot this election. Please be aware that early voting will start on Thursday, October 27th and will continue through Thursday, November 3rd. Election Day is Tuesday, November 8th.

Reprinted below are the front and back of a brochure that will be handed out at the polls. These recommendations are consistent with mine.

With respect to the ballot questions, there is one State Question (Question 1) and six County Questions (Questions A-F). Here is my take in plain English:

Question 1 is an attempt by the General Assembly to change the way the Governor fills a vacancy of the Attorney General or the Comptroller.  Vote AGAINST on this attempt to limit Governor Hogan’s power.

Question A would remove the unnecessary requirement to update the County code every 10 years.  Vote FOR because the Code is already updated several times a year as new laws take effect.

Question B allows budget bills to become effective immediately rather than 45 days after they are signed into law.  Vote FOR because this will allow the County to function more efficiently in budget matters.

Question C increases from $25,000 to $75,000 the value of purchases that require competitive bids.  Vote FOR because this will dramatically speed up the County’s procurement process by reducing the red tape that currently slows government projects.

Question D would require the County Executive to hold two public meetings on his budget prior to introducing his budget. Vote AGAINST because this an attempt by the County Council to micromanage the executive branch and violates the principle of separation of powers.

I was working on an explanation of the ballot questions but the local Capital newspaper published an article on the questions with a fairly clear explanation.  I have included the text of that below with a few extra thoughts of mine that are marked as “Jerry Walker:”  Hope this helps with your research:

This amendment would get rid of a rule that the county must update and reprint its code once every decade. Officials say the code is now updated electronically on a continuous basis as new laws are passed. An electronic version of the code can be found online on the county’s website. Paper copies are also available upon request.

Jerry Walker: I support this and its fairly clear.

This amendment would allow legislation that approves financial transfers within the county budget to pass into law immediately.

Appropriations, or monetary transfers to pay for county projects, must be approved by the County Council. These transfers are treated like any other legislation, which means they must wait 45 days to pass into law. The charter amendment would create a separate category for financial appropriations so that the money would become available right away.

Currently, only emergency bills — legislation deemed necessary to protect the public’s health, safety or welfare — are allowed to pass into law immediately. In the past, appropriations were often introduced as emergency bills, but some council members questioned the appropriateness of that practice.

Jerry Walker: The traditional wait period forced the transfer of funds in the fourth quarter of the fiscal year to be introduced as emergency legislation in order to impact the proper fiscal years financials.  I supported this change.

This amendment would raise the baseline value for goods and services that must go through the county’s formal procurement process to $75,000.

County departments currently are required to accept formal bids for purchases of goods and services that are expected to cost more than $25,000. Smaller buys can be fulfilled through a more informal procedure, in which procurement officials reach out to at least three bidders and choose from among their proposals. Those bids do not need to be publicly advertised.

County officials say getting rid of formal bidding for purchases estimated to cost less than $75,000 would speed up transactions and clear the way for procurement staff to focus on bigger deals.

The proposed limit is a compromise between the Schuh administration and council members. Schuh originally asked for a $100,000 minimum for procurement but council members reduced the threshold to $75,000 after expressing concerns that a higher minimum might shut out potential bidders who would not be made aware of an opportunity to contract with the county.

The charter amendment is enabling, which means that if it passes it will head back to the council, where councilmen will have an opportunity either to approve a $75,000 procurement minimum or reduce it.

Jerry Walker: Currently anything that is purchased above $25,000 has to go through a sealed bid process.  The County Executive proposed raising it to $100,000.  I was opposed to that big of an increase and introduced an amendment to change it to a maximum of $50,000.  The council ended up compromising with the administration at $75,000.  If this passes the council can set the new rate anywhere between $25,000 and $75,000.  I think we need to be careful to avoid a buyer colluding with a vendor and I’m hopeful that the council will put safeguards in place to ensure that the purchasing program retains its integrity and transparency.

Though it isn’t required, Anne Arundel County’s two most recent executives have held public meetings to solicit input on the budget before it’s introduced. Former County Executive Laura Neuman started the practice in 2014 and Schuh has continued the tradition.  The Schuh administration opposes the amendment and has called it “legislative micromanagement.”

Jerry Walker:  As mentioned in the article, the County Council holds public hearings on the budget each year which allows us to hear the citizens input on the budget.  The charter only permits the council to cut funding from the majority of categories in the budget.  The County Executive is the only one permitted to add things into the budget (except Board of Education) so the decisions on how money is to be spent is fully in his/her control.  Mrs. Neuman and Mr. Schuh have both held public forums allowing citizens to offer suggestions prior to the budget being proposed to the County Council and this amendment would force all future executives to continue this practice.  By doing this we give the public the ability to offer input in the budget before its crafted and submitted to the Council for approval.

Jerry Walker: I have no problem with this as it tends to just be technical in nature.

This amendment would allow the County Council to issue money for capital projects as soon as a new budget takes effect July 1.

Traditionally, a bond bill designating money to capital projects approved in the new budget is introduced in July and usually does not pass until September because of the council’s August recess. Because there is a 45-day waiting period before legislation takes effect, money for projects might not be available until six months after the new budget cycle begins.

Jerry Walker: This was proposed by the administration and while the council had some questions about it I think it would help by speeding up the start of certain capital budget projects (think infrastructure).

This amendment would change the process for filling a vacancy of the attorney general or comptroller.

Currently, the governor is given the discretion to choose a replacement for those two offices. This constitutional amendment would require voters to be given the opportunity to elect a new attorney general or comptroller during the presidential election if the vacancy occurs before then.

In the meantime, an interim replacement would be required to come from the same party as the official whose position became vacant. The governor would choose from a list of three names forwarded by that party’s state central committee.

The replacement process would be similar to that used for legislative vacancies, where local central committees choose replacements for lawmakers of their party and send recommendations to the governor.

The change proposed by state Sen. Paul Pinsky, D-Prince George’s County, and Del. David Moon, D-Montgomery County, would likely favor Democrats, who have held control of the office of the attorney general for a half century and the comptroller’s office for longer than that. Gov. Larry Hogan, a Republican, is opposed to the change.

Early voting begins Thursday and runs through Nov. 3. Election Day is on Nov. 8.