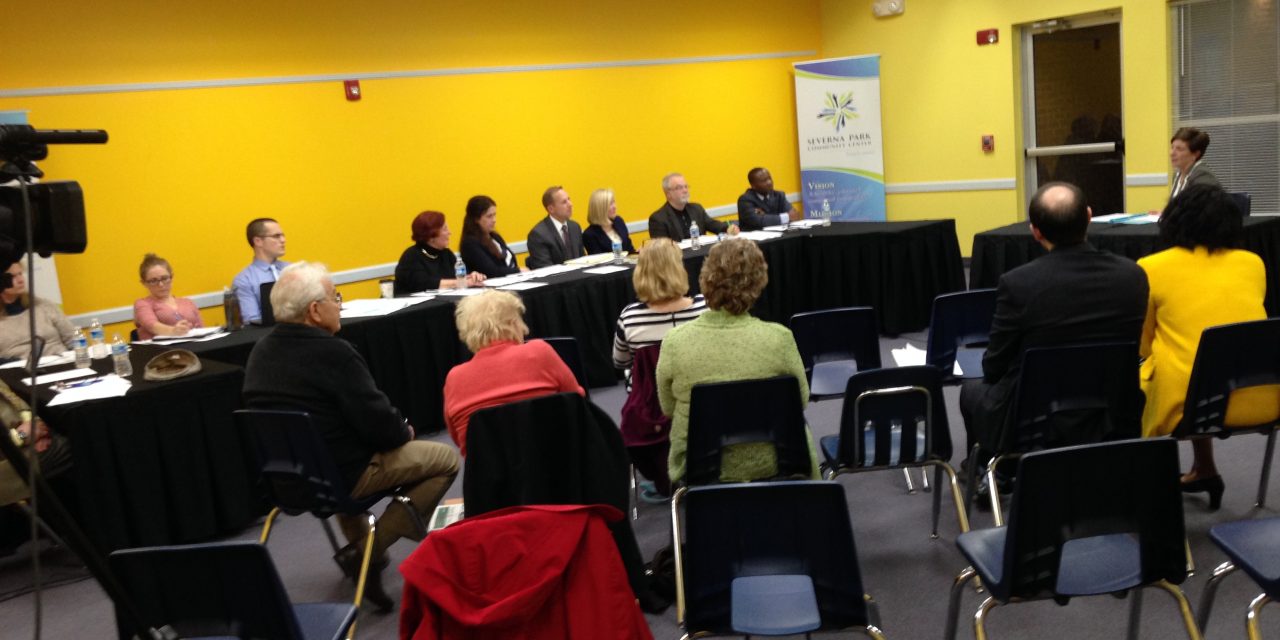 Note: The following public testimony was read in part at three public hearings:

Public Testimony of J.H. Snider
Before the Anne Arundel School Board Nominating Commission,
Presented in parts from November 17, 2015 through March 14, 2016

Congratulations to the new SBNC commissioners.  My name is J.H. (“Jim”) Snider, and I have been an attentive student of the SBNC since the legislature passed legislation creating it in 2007.  No member of the public or press has attended more SBNC meetings, and no one has published more about its proceedings.  I, for one, consider the SBNC to be a very important democratic institution.

My primary focus, as someone with a Ph.D. in American Government and a career focused on democratic reform, has been to improve the SBNC’s democratic processes.  My various observations and policy recommendations can be found at eLighthouse.info.

No previous meetings to address administrative matters either allowed public comment or provided advanced public notice of the administrative agenda items to be discussed.  Two of the SBNC’s most important administrative meetings shortly after the SBNC was created were conducted in secret and without public notice.  Maryland’s Open Meetings Compliance Board later rebuked the SBNC for conducting those meetings in private.  Good luck finding that rebuke on the SBNC website.  The SBNC’s public record keeping has given the memory hole in Orwell’s 1984 a good name.

But even that only begins to scratch the surface.  At least those administrative procedures were passed at an official meeting of the SBNC.  This year the former SBNC chair took to passing critical new administrative procedures by fiat.  In particular, he encouraged applicants to bypass the public hearings process established by statute by sending him electioneering information to his private email account, which was then shielded from public scrutiny, including via Public Information Act requests.

I wish to express my thanks to the current SBNC Chair for inviting me to share my thoughts at this meeting on improving SBNC administrative procedures.  I hope at least some of my eleven recommendations prove useful:

I would like to close with two questions [also prepared for the February 1, 2016 meeting].

First, over the years I have repeatedly asked SBNC commissioners and other Anne Arundel County politicians why they don’t create an explicit budget for the SBNC. The answer I have always gotten from politicians associated with both political parties is that they don’t want to spend money on such a line item.  But taxpayers already pay a lot to support the SBNC.  My estimate is that it has cost taxpayers at least $50,000 since 2008.  What have taxpayers gotten for all that money?  Not very much: a public records pigsty, massive shirking of right-to-know laws, including extensive use of private and unaccountable email for government business, and now nominees approved with a process that clearly violated Maryland law.  Our Maryland General Assembly and local leaders have been providing administrative support under the table, which prevents political accountability.  There is a reason we have right-to-know laws with regard to government budgets.  It is to deter exactly the type of abuses I have chronicled in my comments.  And, sad to say, creating controls to hold public officials accountable does cost money.  Pretending that it doesn’t is simply a recipe for corruption.  As SBNC commissioners often say, you get what you pay for.  That includes not only teacher quality but political accountability.  Do you genuinely believe that supporting a zero public accountability budget—that is, zero money explicitly allocated for such a purpose—is really in the public interest? [Postscript: Michelle Davis, the SBNC’s previous counsel provided gratis to the SBNC by the Maryland General Assembly’s Department of Legislative Services, should be invited to testify at the SBNC’s next public meeting to address procedural issues.  Among the questions she should be asked is why, after many years of free service to the SBNC, she–or one of her colleagues, if she wasn’t able to attend an SBNC meeting–suddenly and permanently disappeared with no public notice when the terms of the last set of SBNC commissioners expired and the current set of commissioners held their first meeting on November 17, 2015.  She should also be asked what she did with all the previous sets of minutes that she was responsible for drafting, revising as necessary, and archiving for the convenience of the commissioners.  Finally, she should be asked about the draft of the procedural manual that she was tasked with drafting for the SBNC in 2010.]

Second, I would like to ask whether in retrospect it was really worthwhile trying to prevent me from raising SBNC procedural issues at the SBNC’s November 17, 2015 meeting?  What did you really gain by doing so?  When the Maryland General Assembly, Anne Arundel County Council, or Anne Arundel County Board of Education seek to make major procedural changes, they all use a system of public notice and comment.  Since 2008, the SBNC has not allowed for public notice and comment when making major procedural changes.  The culmination of that desire for control over public comment has resulted in the violation of law that this second public hearing seeks to remedy, the complaints filed by the Anne Arundel Democratic Central Committee to the Office of Maryland’s Attorney General, and abundant adverse coverage in both the Washington Post and Capital for the SBNC’s gross carelessness.

[Original conclusion.]  To conclude, now that I have had a chance to present these administrative recommendations, I would like to announce publicly that I plan to bring my endeavors as an SBNC procedural gadfly, which began in 2007—exactly ten years ago to this winter, when the Maryland General Assembly passed the highly ambiguous and deeply flawed legislation creating the SBNC—to an end.  I have told some of you of my intent to do this privately.  I said, just let me finish my recommendations and I’ll finally go away.  I’m now doing so publicly.  An archive of my hundreds of pages of SBNC coverage since 2007, when the Maryland General Assembly created it, can be found at eLighthouse.info.

[Revised conclusion from March 14, 2016.]  Finally, all my comments have been about the SBNC’s democratic design (uncapitalized d) writ small.  In light of the legislation introduced by the Maryland General Assembly last week in regard to the future of the SBNC’s membership, I would like to add a comment about the SBNC’s democratic design writ large.  Since at least 2008 I’ve argued that the SBNC’s institutional design probably violates the Equal Protection Clause of the U.S. Constitution’s 14th Amendment.  Since I believe the General Assembly’s proposed changes aggravate that violation, I would ask that you alert it to the legal risk it is taking.  It is tempting to treat laws as a joke when no one has an incentive to enforce them and the press could care less.  But if the current law passes the General Assembly the incentives could change.  This is a risk that should be carefully considered, not glibly dismissed.

If you have any questions, I’d be happy to answer them.