A modest proposal for the Capital: Fire your reporters and replace them with photos

The Capital has recently taken to advocating for what democratic theorists call “descriptive representation” as a benchmark for how well the Anne Arundel County Board of Education is serving the public.  I thus have a modest proposal: The Capital should cut its coverage of the school board and replace it with the following picture: 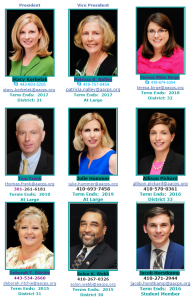 According to the Capital‘s view of descriptive representation, this is all you need to know:  the board currently has 6 females and 3 males, 8 whites and 1 black, and no Hispanics.  That’s it.

Replacing investigative reporting with photos would have financial benefits for the Capital.  Since the school system provides the photos, the Capital wouldn’t have to pay a photographer to take them.  Heck, the Capital could even save money by firing its education reporter (but it pays them so little, about half a starting AACPS teacher or a fifth a senior AACPS teacher, that it wouldn’t save much money).

The Capital should further insist that the school system (the taxpayers) foot the bill for placing this picture in every issue of the Capital so that the public can be informed about its representatives on a daily basis.  Anne Arundel taxpayers already pay $140,000/year for all those legal notices hidden in the back pages of the Capital, so there is good precedent.   And so the Capital doesn’t look like it’s lobbying the public officials it covers, it should ask the DC Maryland Press Association to do the dirty work on its behalf.

There are a lot of other benefits to this proposal.  The Capital could quit pretending that its education reporters (which usually come and go about once a year) know much more than the average parent about the school board.  It could dispense with rewriting AACPS press releases so they can be published on its news pages.  It could quit pretending that it is reporting based on investigations of what school board members actually do as opposed to how they present themselves.  And it could quit attending SBNC meetings, reading SBNC candidate applications, or doing any fact checking or other background checks on SBNC candidates.  But come to think of it, between 2008 (when the SBNC began) and the second SBNC election cycle of 2015 that’s exactly what the Capital did.  So I guess my modest proposal would just be business as usual.

For those of you who follow politics closely and thus recognize the bankruptcy of substantive news reporting (e.g., not judging people by their skin), here is a picture of the U.S. Supreme Court: 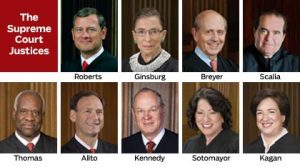